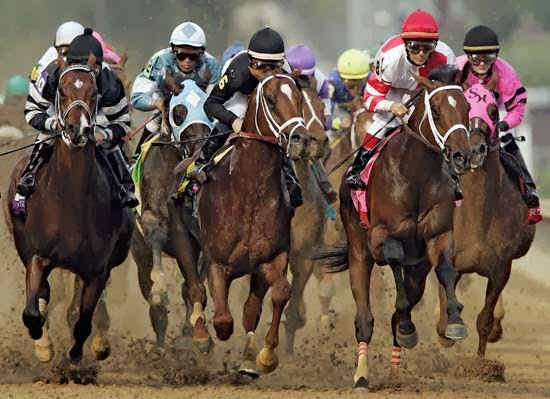 "NEVER BET ON SURE THING UNLESS YOU AFFORD TO LOSE" Anonymous

Race 2) GREAT SECRET
Failed favourite in his next to last race in same class.Now demoted after being promoted for one race and 200 m more to travel is the main contender in this field.

Race 5) AMBITIOUS REWARD
After  couple of good shows in classics now returns to handicap race ,is a strong finisher and should be a horse to beat unless some other contender shows some sudden improvement.

Race 6) EMPEROR CRUISE
Surprise winner on debut and than second to NURAY in his next start over same trip.Has a fair chance from pillar to post

Race 7) SUPREME FAIRY
Working well and should run a better race on debut.

RACE 8) OBELINNA PRINCESS
A very speedy Mysore based filly who found the unbeaten FINK too good and finished close second in her last start has a good chance with Ace rider PSC to guide her in this competitive field.

Posted by dharmesh at 10:07 No comments:

Good Luck,Bet wise.
Posted by dharmesh at 01:13 No comments:

Ignore her last run.In her penultimate start she was shocked at the post and ended second.Now down in class after promoted in last race.May surprise.

During last winter season she has raced consistently with younger horses in class II.Now down in class and running in race for 5 yrs & over, has a very good chance in this moderate company with PSC on board.

Has come down lot in rating is the best in field class wise and is blazing in the morning trials with same jockey astride now.Good eachway bet.

Runaway winner in race no 54 in lower class.In her last start pulled up lame on right fore and finished 8th.Working extremely well and should win easily.

Failed as a on money favourite in her last start,now demoted should redeem loss.

Is the horse in form as he won twice and once finished second in three of his starts this winter.Cannot be ruled out for another victory.

Very consistent last season.Twice unlucky when finished close second including in her last start in class III over same trip.Now demoted and jockey changed to YSS may run pillar to post.

Race 4) AZURITE:- Is the one that impressed in her both the starts.On her present form and a top jockey on board looks like a horse to beat in this terms maiden race.

Race 5) MANNAT-Won impressively in a million race at Hyderabad, is in good form and has to defy penalty.Same owners as of HIGHRAZ may win at good odds if fancied by them.

Race 6) BE SAFE-should make amend for the failure in Poonawala million.

Race 7) VALERIAN-Consistently finishing on board in a good company and may strike now.

Race 8) ALEXANDRA MILLS:- A strong finisher who likes to come from behind.Caught the eye in his last start while finishing flying second to unbeaten FINK in Bangalore Juvenile Million over the same trip.Now retains form and with same jockey astride should make amend in present class.

Race 9) WEST SIDE STORY-Won impressive on debut.Now running after five months and this should not be an issue as she is regular in morning tracks and looks fit enough to defy penalty.

Posted by dharmesh at 10:56 No comments:

Hello my favorite horse racing handicappers! We are just one days away from the most watched horse race of the year the 2014 Kentucky Derby. The post positions were drawn yesterday so it’s time to roll out our 2014 Kentucky Derby Free Picks. These picks take into account the prep races leading up to the big day, their running styles along with post position. California Chrome looks like the one to beat and one horse that was thought to rival him Hoppertunity has just announced his withdrawal from the race. With a race that has 20 of the best three year olds going at it post position does play a big factor as well. Here are a few facts below:No horse has ever won the Kentucky Derby from the 17th gate.
Being stuck on the rail can be bad news has there has not been a Kentucky Derby in the last 25 years that has won from the 1st and 2nd post position.
In the last 2 out of 3 Derby Races 16 has been the lucky number as Animal Kingdom and Orb raced from there.
Post position 10 has the most winners sitting at 9 Kentucky Derby winners coming from that post position.
With that being said a horse can always upset the odds as crazy things have happen in previous Kentucky Derby’s with long shots taking the Roses. Here are the 2014 Kentucky Derby Free Picks:
1.) California Chrome – He killed the San Felipe and Santa Anita Derby showing the strongest presence out of any Derby prep races. Looks like the one to beat and he can stalk the pace with firing hard at the end. His 77 year old Trainer Art Sherman would become the oldest trainer to ever win the Kentucky Derby. He has guaranteed a win with this horse being rode by the excellent Victor Espinoza.
2.) Wildcat Red- I really like this horses spirit and he has won the hearts of people at the paddock. Reminds me of a horse that we might know called Zenyatta. I don’t think he is as good as Zenyatta and will have to pack his lunch to beat California Chrome but has a shot. Admire how he always battles and if his condition is good he will be in the mix.
3.) Danza- With this field this horse should be in the mix and taking 3rd place would be possible. He is one of the most impressive horses out of the top 2 above. Pletcher always gets a good horse to vote for him and he will be hoping this horse can pull it off.
COURTESY: Horse-racingtips.com
Posted by dharmesh at 15:44 No comments: